The Studio System: Louis B. Mayer - King of Hollywood 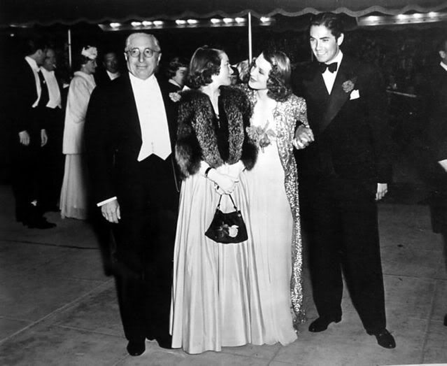 So why would some of the bigger names in Hollywood hate the Studio System? Aside from their lack of profit participation, anyone who aspired to see their artistic vision on screen would often find him or herself disappointed. In order to work in Hollywood, one had to sign a contract, many for seven years. For the length of the contract, the performer would have to do whatever the studio asked them to do. Didn't like the script? Too bad. Not sure of the movie's casting? Tough luck. If you were on Louis B. Mayer's payroll, you did as he wished.
If you didn't do what he wanted, there'd be hell to pay.
Now most of the time, if one party were judged to be in breach of contract, the other party could then sever all ties and cancel the contract. Many stars tried this tactic to get out of contracts; maybe they decided that Warner Brothers had better scripts or opportunities than MGM, so they would refuse to take on a project and try to get fired. Louis B. Mayer, however, would often not let them out so easy. What could be worse than getting fired? Having Louis B. Mayer enforce your contract and pay you to do nothing. While that might sound like a good idea, Hollywood celebrities have to stay in the limelight to remain famous and bankable. In this case, getting paid to do nothing was often disastrous for their career. Mayer typically wouldn't enforce the contract for its full remaining time; after all, paying someone to do nothing is obviously a waste of money. He would, however, enforce the contract just long enough to cause damage to the recalcitrant actor's career. Nobody challenged Mr. Mayer and got away with it.
Posted by Ralph at 7:57 AM