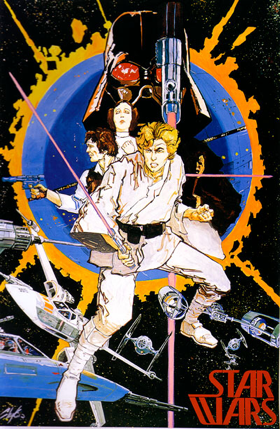 In 1976, both Comic Con and Star Wars were relatively unknown and untested. Since Twentieth Century Fox believed that Star Wars would fail at the box office, George Lucas had to marshal his own meager resources to gain publicity for his film. He was putting every nickel he could find into the film, so he sent a representative down to Comic Con with a bunch of posters to sell hoping to get some credibility with the geeky audience he knew he would need as his base. The posters sold for $1.75 each and had a dual purpose; to get the film's name out there and at least recover the money it cost to setup a booth. The posters sold out, delighting George and possibly sparking up interest in the movie. As you can probably guess, the people who purchased these posters were very lucky indeed. Mint condition posters purchased for $1.75 in 1976 can command thousands of dollars today.
Posted by Ralph at 7:51 AM