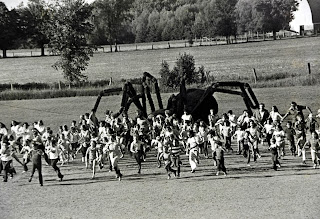 Fans of the movie Giant Spider Invasion, starring Alan Hale, Jr., Barbara Hale and a cast of Wisconsin bumpkins, have a reason to be sad tonight. The legendary "Giant Spider" used in the film's climactic final scenes was stolen, dismantled and sold for scrap.

Obviously just a metal framework mounted on a VW beetle, the spider was one of the most ridiculous things in the film. That's saying a lot, since the entire movie was nothing but a ridiculous mess. By the time the spider enters the picture, audiences are so shell shocked by the ridiculousness of it all that the spider hardly registers upon first viewing, but subsequent viewings always show this unspecial effect for the train wreck it is.

Why was it so easy for this classic movie prop to be stolen? It was just sitting in a random field, slowly rusting away. It could be argued that the thieves were merely putting it out of its misery, providing it with a more dignified ending.

The giant spider is survived by its bad movie prop brethren- the painting of the Master from Manos, Mikey's Bike from Teenage Strangler and Carol Channing's bra from Skidoo.
Posted by Ralph at 12:31 AM